My poetry chapbook, After Effects, has been published by Finishing Line Press. 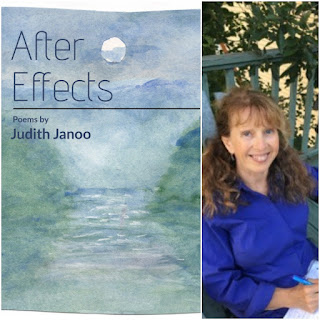 “By delving into the past in her new chapbook, After Effects, poet, Judith Janoo, brings the reader from the depths of despair, caused by war, into the hope for peace. ‘.…like the memory/you didn’t know/ what to do with….’ from her poem, ‘What You Passed On…’
The poet engages the reader with poetic empathy and visual reality. ‘….the suffering of a gentle/man made infantry man…’ then leads us generations forward to a peace march, where a granddaughter reminds us in the final poem, ‘Take to the Streets, February 15, 2003 ‘….it isn’t dangerous/to walk only to not say a word.’ Take the journey from war to the quest for peace in this elegant collection.”
—DianaleeVelie, Poet, and author of five collections, most recently, Ever After.
“In the very particular, Judith Janoo finds and reveals the universal: In her hands, battles that have wounded the ones we love echo the pain and fear of larger violence. In After Effects, she tugs at the details of a hay barn’s rafters, the “butterfly magnets” of pink blossoms, the whisper of fabric against wood. With precise and open language, she invites the reader into the family dance of anger, blame, and yet somehow enduring love. I know I will be re-reading her poems, many times, to treasure their flavor, fragrance, and tears.”—Beth Kanell, Vermont poet and novelist, author of most recently, The Long Shadow
“The poetry of Judith Janoo’s After Effects speaks within the silent spaces she has so compassionately provided as we are left to contemplate, in safety, our own histories.Sounds echo like images she catches in countless mirrors…”beaches of gunfire: fishermen, farmers,teachers, turned soldiers, turned onto beaches of gunfire: gentle men…foot soldiers fog blinded…Souls crying for leaders.” I am certain that Ms. Janoo and I have marched together—Fifth, Main & Pennsylvania. Judith Janoo’s geographies travel far and wide, from Normandy nightmares of beaches beyond Baghdad, to Buddleia laden with butterflies blooming in the absence of War. Judith Janoo teaches Peace to her daughter through the courage of her words, and in gratitude, to all who shall accompany her.”
—Peggy Sapphire, poet and author of A Possible Explanation, In the End a Circle, and The Disenfranchised: Stories of Life and Grief When An Ex-Spouse Dies.

Or look at webpage:  judithjanowriter.com

Popular posts from this blog